The keto diet replaces one energy source with another, but as the body starts using ketones for energy instead of glucose, many dieters report flu-like symptoms. These effects are nothing to worry about and will pass as your body adjusts to the new diet, but they’re still not fun to experience. However, there’s a lot you can do to feel better and overcome the keto flu!

What Causes The Keto Flu? 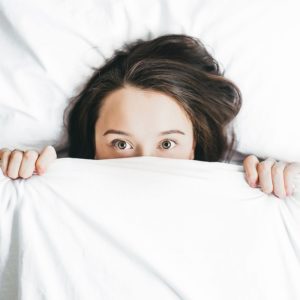 In the early stages of the keto diet, the body needs to adapt to using fat instead of carbs for energy. Our bodies are so used to convert carbohydrates into glucose that when we are deprived of carbs, we go through withdrawal, and this is the cause of the keto flu. New dieters might feel fatigued, headaches, cramps, dizziness and nausea, as well as a little irritable from the craving for carbs.

These symptoms don’t usually last longer than a week, but the flu-like misery has caused many people to give up on the diet. Their mistake is that they think nothing can be done to alleviate the keto flu. There are many steps one can take to reduce the symptoms!

Getting Rid Of The Keto Flu

Don’t cut out the carbs too quickly, but rather start with a low-carb diet before you go head-first into keto. By doing too much too early, dieters will have to deal with a serious bout of keto flu that can put them off of the regimen for good.

Another mistake is that people don’t eat enough food. It’s not enough to reduce the number of carbs you eat; you have to eat, too. Getting enough healthy fats will reduce your cravings and give you enough energy to combat fatigue. Meal planning and preparation will prevent you from ever starving yourself from a perceived lack of options.

Many keto dieters report having to go to the bathroom more frequently. Ketosis rapidly sheds the body’s stores of water as it uses fat, and this can increase the risk of dehydration. Make sure to drink plenty of water.

When you hear “electrolytes” your first thought is probably a sweet, brightly-coloured sports drink. These drinks are off-limits in the keto diet, but it’s very important to get enough electrolytes from your diet. This is because as your insulin levels decrease with ketosis, the kidneys naturally remove sodium from the body.

Foods high in salt, magnesium, and potassium will prevent you from cramping up and getting headaches. You’ll find these minerals in avocados and leafy greens, and don’t be afraid to reach for the salt!

Step 4: Don’t Do Any Strenuous Exercise

In the first week or two of keto, it’s good to avoid strenuous exercise. Even if you take steps to reduce symptoms, it’s still natural to feel cramped and fatigued. You’ll only do your body more damage by performing intense exercises like running and biking. Put these activities on hold until your body adjusts to its new source of energy.

You might feel like you’ll want to sleep earlier, so don’t fight it. A lack of sleep can raise cortisol levels in the bloodstream, and this will only make the symptoms of keto flu worse. Follow a healthy bedtime routine that helps you sleep through the night, and you can do this by turning off screens at a reasonable hour, going to bed and waking up at the same time every day, and cutting down on your caffeine intake.